Cognex’s SurfaceFX tool offers a new way to inspect physical features that are engraved, embossed, stamped, etc.  It can find physical defects such as scratches, dents, puncture holes, etc.   SurfaceFX outputs an image that any of Cognex’s existing tools can use to analyze.  Cognex SurfaceFX opens up many possibilities for inspections that would otherwise be difficult or impossible.  We have included some sample imagery below captured at KTM Research’s facilities to demonstrate the capabilities of SurfaceFX. 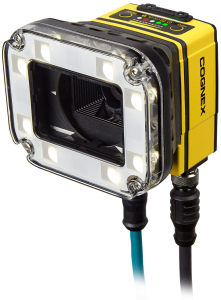 While the new on-camera illuminator’s independent control of the four quadrants enables the SurfaceFX tool, it also opens up other new imaging possibilities that would have previously required complex off-camera hardware.  Below is an example of a ping pong ball being imaged with each of the four lighting quadrants (left, top, bottom, right) demonstrating the directionality of the light.

The SurfaceFX tool takes these four images and generates the SurfaceFX image.  The SurfaceFX image can then have any of the other Cognex filters, tools, or scripts applied.  The new on-camera illuminator with independent quadrant control opens up many possibilities for novel inspection methodologies.

The most direct and simple use of Cognex SurfaceFX is to find physical defects (bumps, holes, etc.) in a smooth surface.  The example below shows a coffee creamer pouch with a small hole in the seal.  With traditional illumination (left), this would very difficult for machine vision software to successfully identify.  With Cognex SurfaceFX (right), the physical features, including the hole, are obvious while printed text/graphics practically vanish. 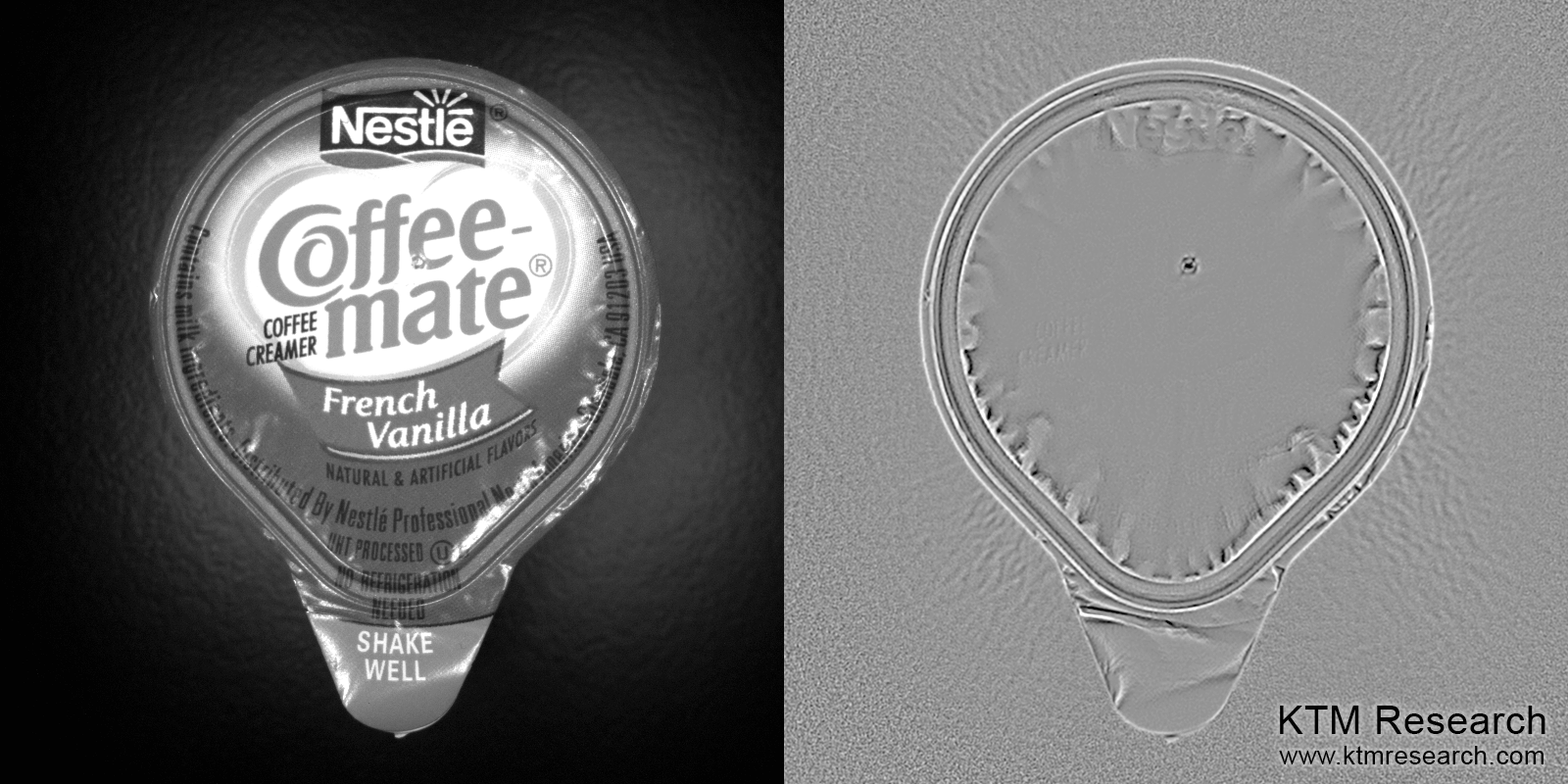 Below is an example of a foil packet with a lot code and expiration date stamped into the material.  The shiny surface would normally make this inspection extremely difficult, even with off-camera lighting.  SurfaceFX and the on-camera quadrant illumination make the stamped features stand out with enough contrast for simple inspection. 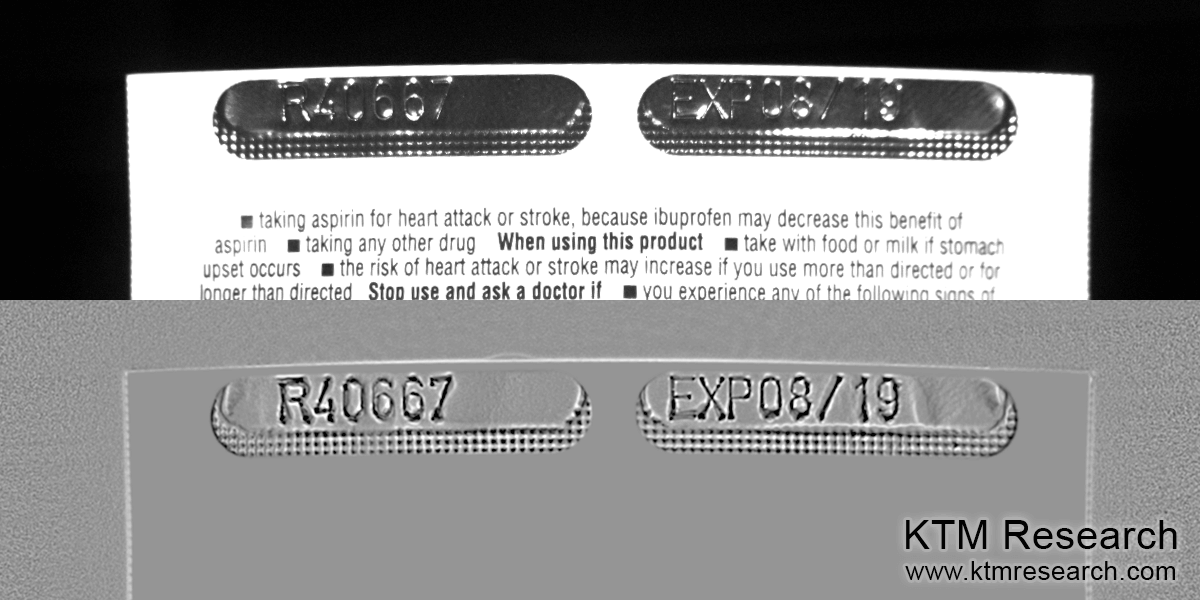 The example below is of an debossed lot code marking in an injection molded part.  The original image (left) shows that with lighting setup to eliminate glare on the marking, low contrast makes the inspection very difficult.  With SurfaceFX (right), the marking stands out in high contrast to the background and allows for easy OCR.

The Solo cup lid below shows a difficult, but potentially possible text extraction application using diffuse lighting.  This type of inspection is made significantly easier using SurfaceFX to increase contrast of the physical features.  Like the coffee creamer example above, the lid has softer, rounded features, but SurfaceFX is still easily able to extract the features with sufficient contrast for analysis.  Again, this example is using a stock In-Sight 7000 Gen II sensor with only the on-camera illumination. 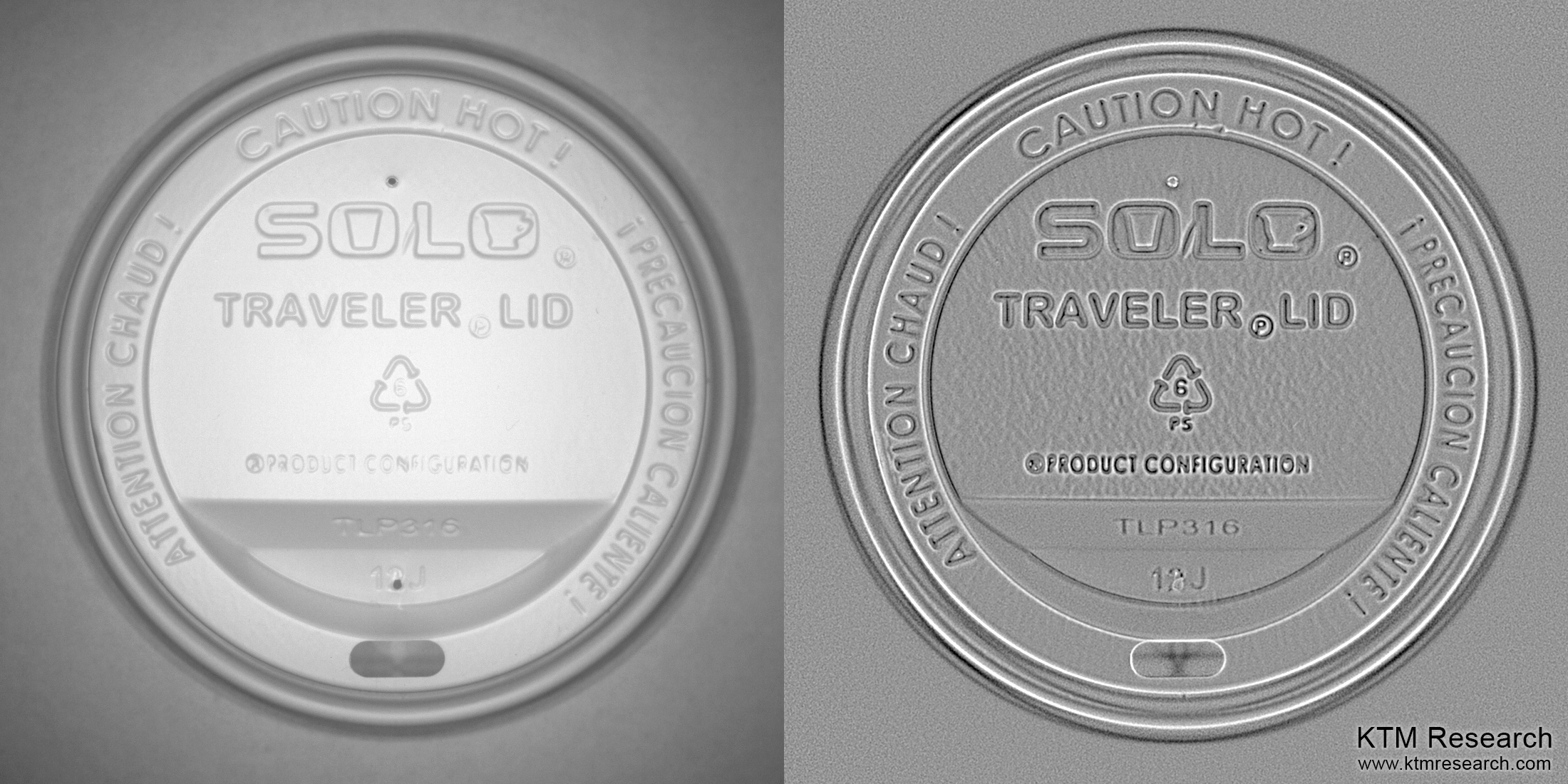 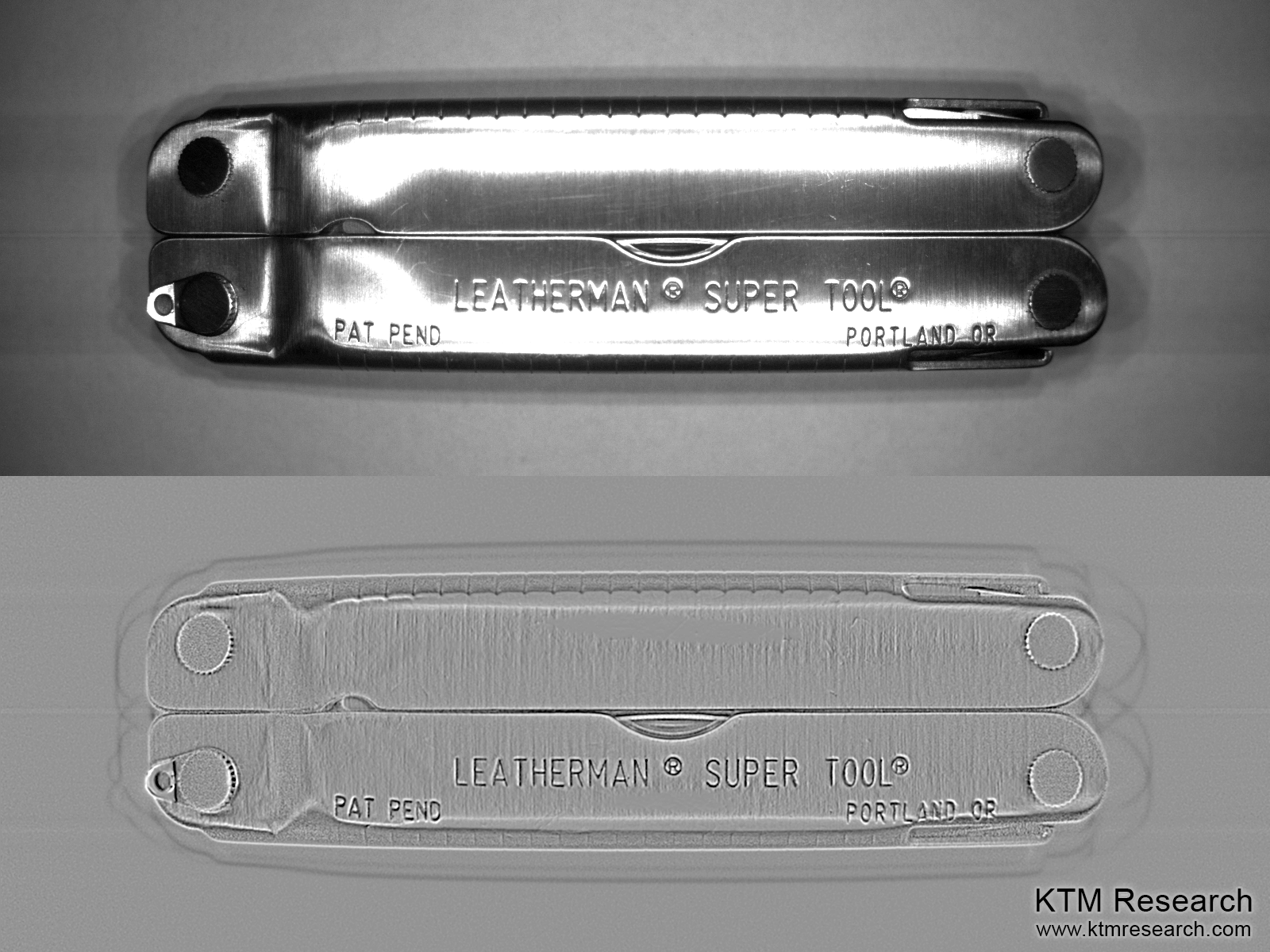 In addition to imaging shiny surfaces, Cognex SurfaceFX can extract very fine details that would otherwise be impossible to discern.  The vertical lines in this Taiwanese coin provide an excellent example of this capability. (Click for full size image.) 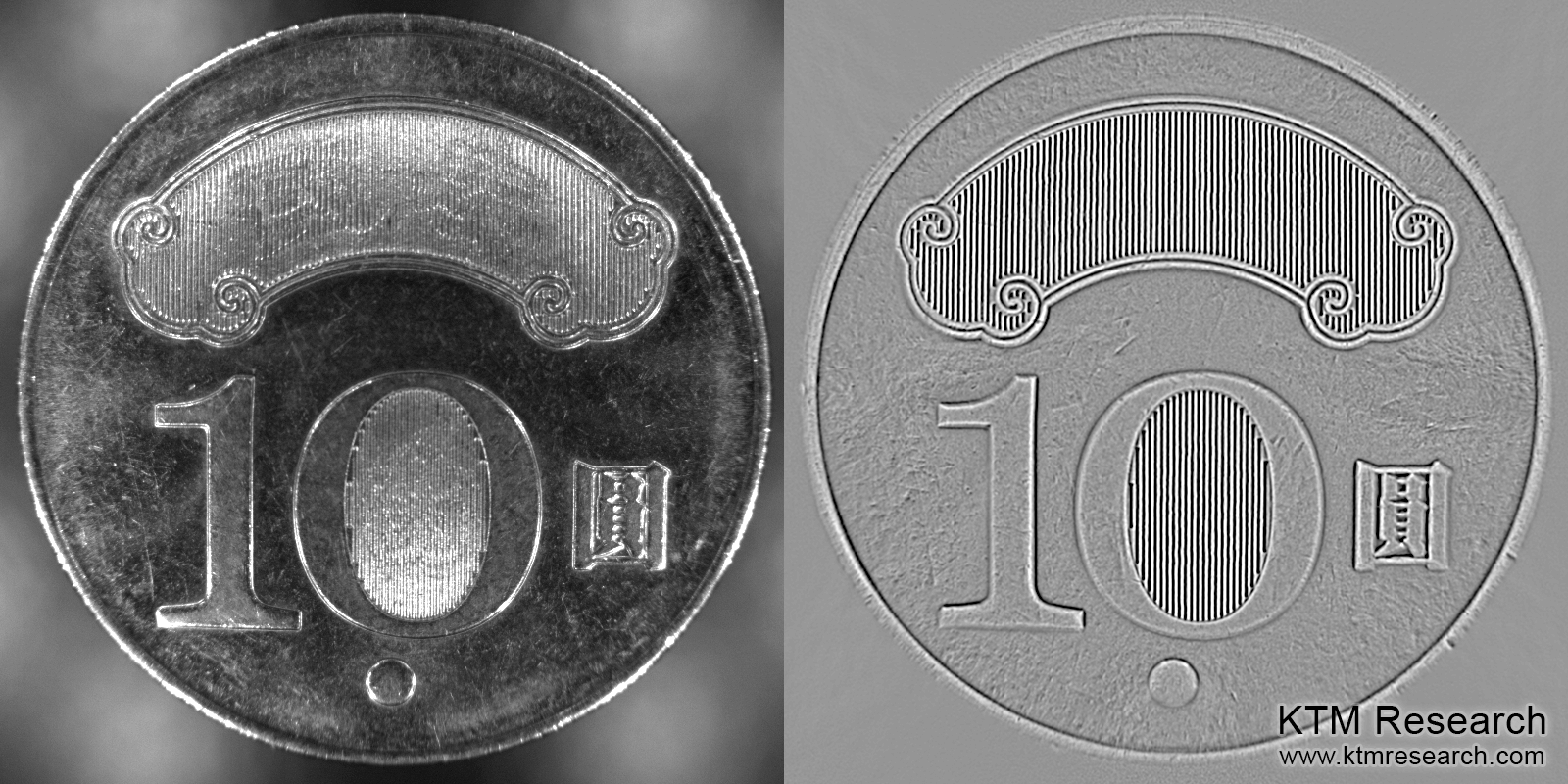 Coins provide an excellent example of everything Cognex SurfaceFX excels at.  They are difficult to illuminate and have physical features that even with off-camera illumination are still difficult to analyze.  Below we have included the full-resolution example of a newer United States penny. 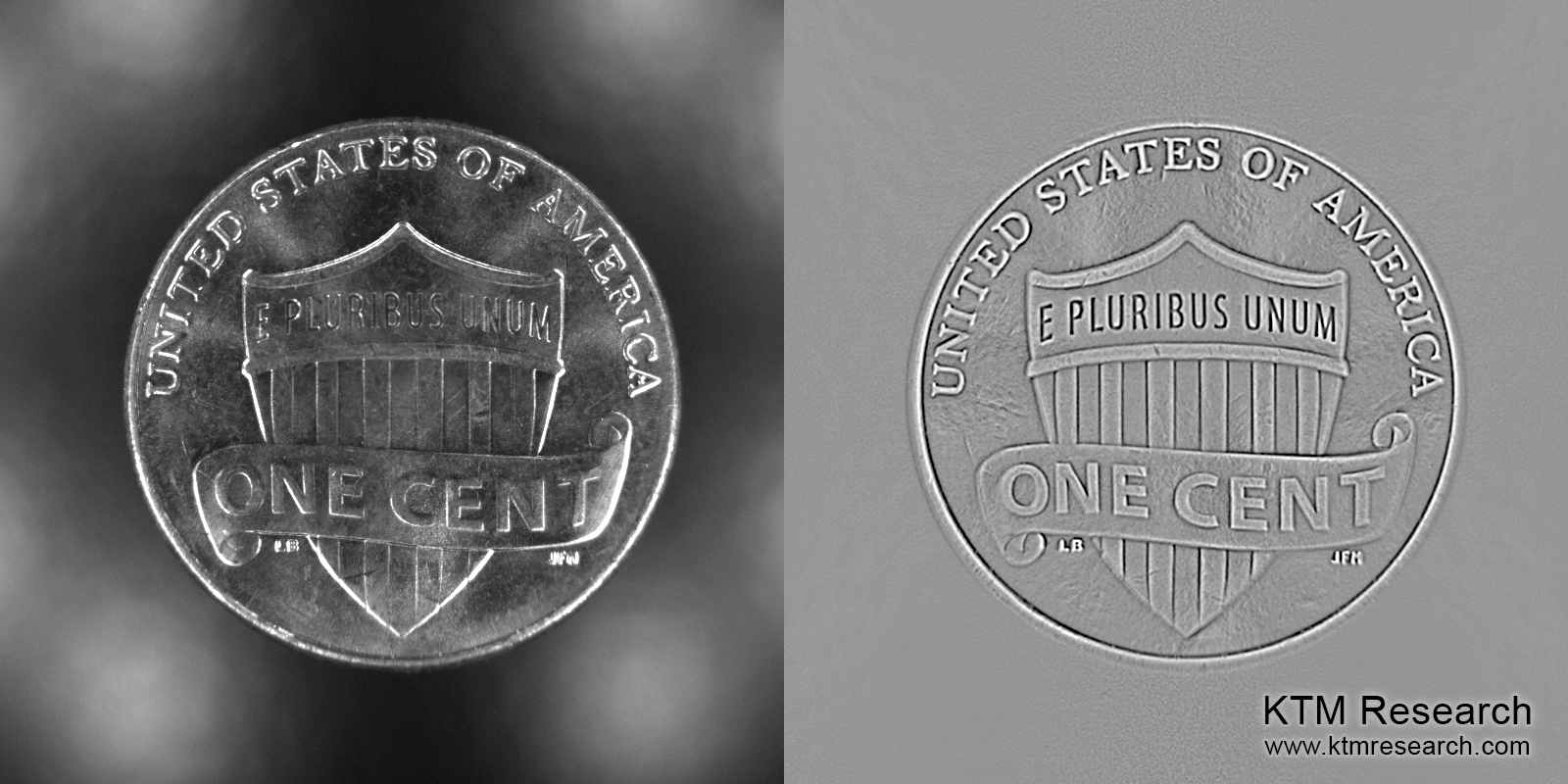 Like the penny above, the quarter below also demonstrates SurfaceFX’s ability to extract physical features.  In this example, all the text around the edge is debossed instead of embossed like is found on many coins. 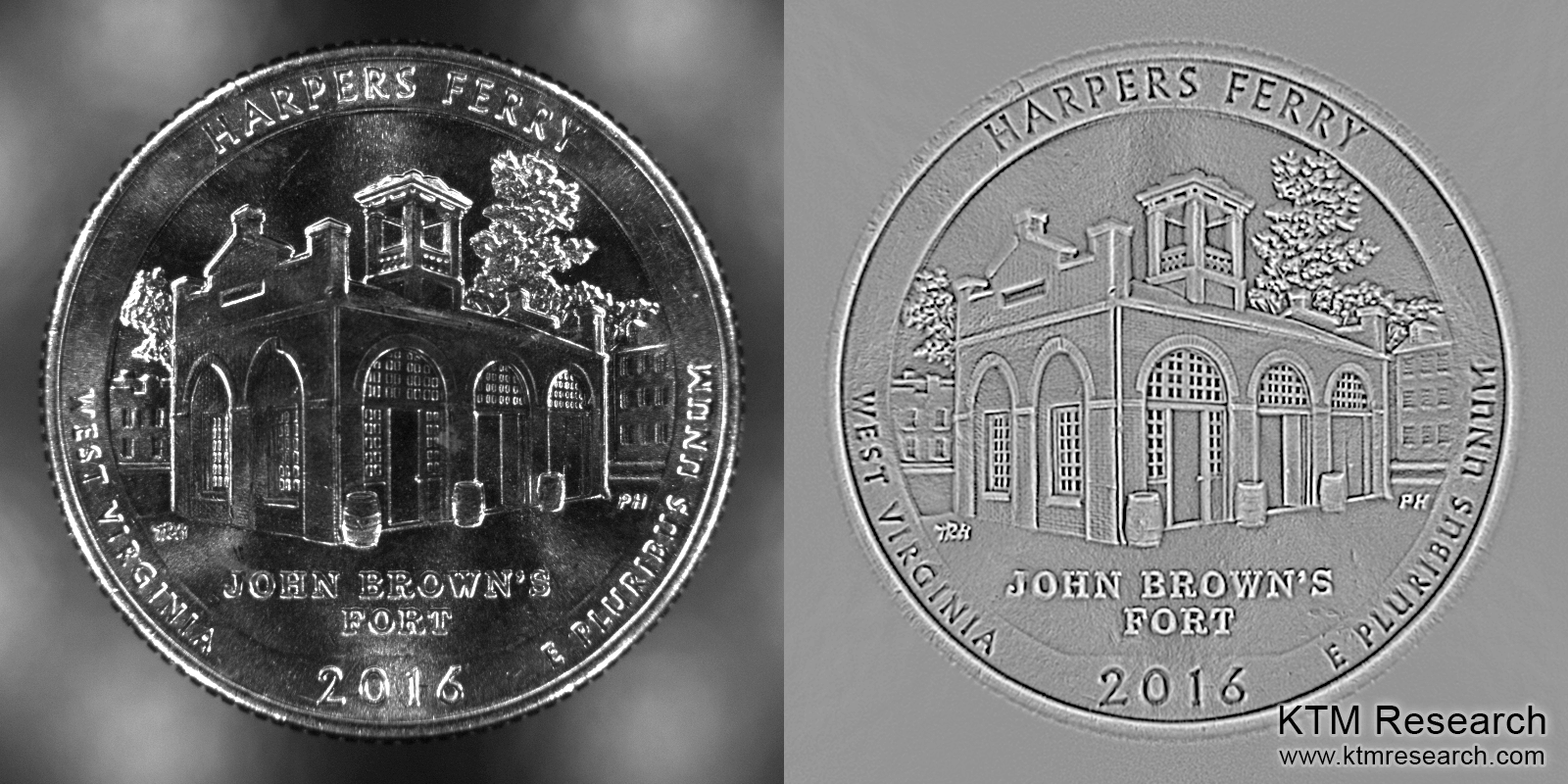 In our opinion, the Cognex In-Sight 7000 Gen II is one of the best cameras that Cognex has produced to date.  The on-camera illuminator is significantly better than anything that Cognex has released before.  The fact that the new illuminator with independent quadrant control allows for the SurfaceFX tool is just one more reason to strongly consider this camera series for your next project.

There are some caveats to consider with SurfaceFX.  The tool relies on illuminating the part from four different sides.  The on-camera illuminator is larger than before, but will work best on objects smaller than three to four inches (75-100 mm).  The camera also needs to be closer to the object than we are used to with Cognex’s other cameras, which can cause distortion issues.

For example, we can show you extreme detail in the back of the below penny.  To the human eye, the Abraham Lincoln statue inside the Lincoln Memorial is almost invisible, but is easily extracted with SurfaceFX. 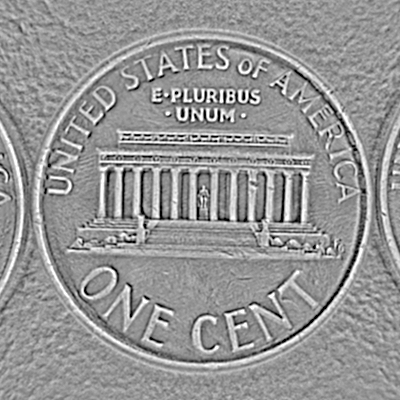 The image below of three pennies demonstrates the reduced field of view that is required to obtain the level of detail on this scale of the middle penny.  Note that in this setup, the front face of the camera/lighting is approximately two inches (50 mm) from the coin.  The image below shows the SurfaceFX effect dropping out on the neighboring pennies.  Click the image for the uncropped full-resolution version. 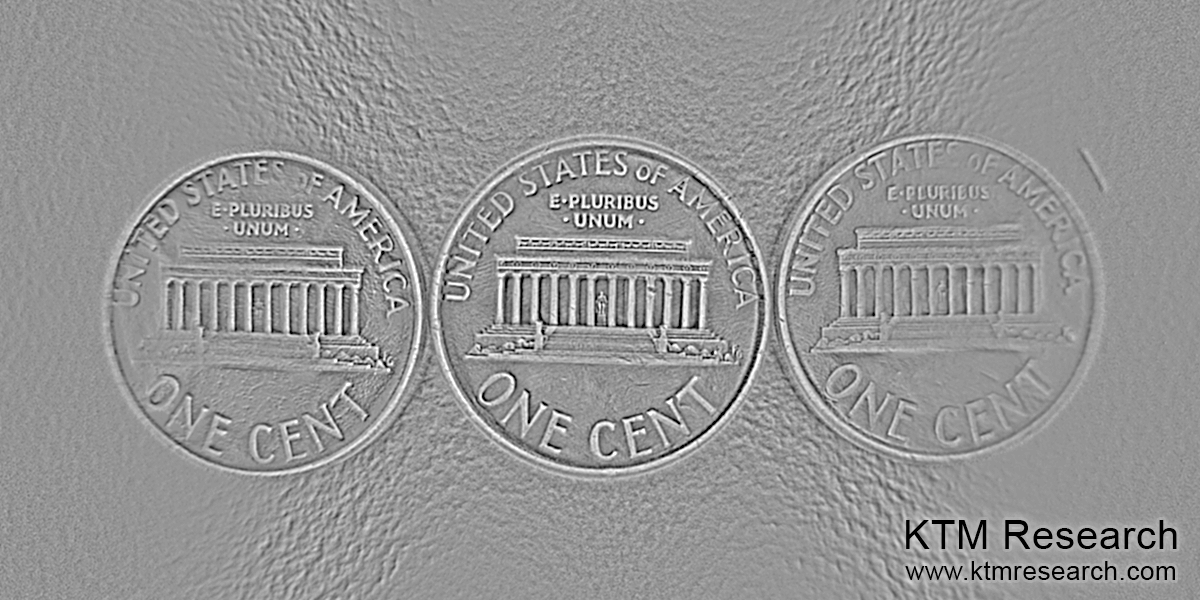 The image of the three pennies above demonstrates an extreme example of the reduced usable field of view.  In most applications, the FOV reduction will not be as extreme, but should be taken into account when designing a system using the new Cognex 7000 Series Gen II cameras.

If you have an application that you believe Cognex SurfaceFX would be a good solution for, feel free to contact KTM Research for more information, or to setup a demo.  KTM Research specializes in machine vision and can make sure your vision project succeed.

KTM Research is an engineering firm that specializes in industrial machine vision systems for quality control and vision-guided robotics.  Formed in 2009, we are located in Tualatin, Oregon.  We serve industries in the fields of advanced manufacturing, consumer electronics, bio-tech, food and beverage, research, and logistics.  Our systems have been successfully used by customers across North America and Asia.

Our goal at KTM Research is to be the first call you make when faced with a vision challenge.  Our team of engineers view themselves as an extension of your organization and strive to be your trusted vision partner.  Our success is our clients’ success.  Our collaborative approach to projects with our conservative and robust design process allows KTM Research to successfully complete projects that many others cannot.

Contact KTM Research at info@ktmresearch.com for more information on our vision solutions.

Update: After writing this article, we did extensive in-depth testing of the new SurfaceFX tool.  Be sure to check out our larger write up on SurfaceFX with many more example images here!

KTM Research has been testing the new Cognex 7802 camera and its SurfaceFX capabilities. We are very impressed with this new camera! First, the camera is one of the best built cameras we have seen from Cognex yet. It is clear that there’s been a lot of thought put into the design that will make implementing the camera much easier than before. One of the most notable new features is the the integrated lighting which allows for individual control over the four quadrants. This gives the new camera and software the ability to pick out hard-to-resolve features and text that otherwise is difficult to identify using InSight Explorer.

Compared to the first generation 7000 series sensor, it feels very robust and has a good heft.  The Cognex In-Sight 7802 is a 2MP camera with 1600×1200 resolution.  The new design offers many more options for configuration than before.  Just look at this chart from Cognex showing some of the available options: 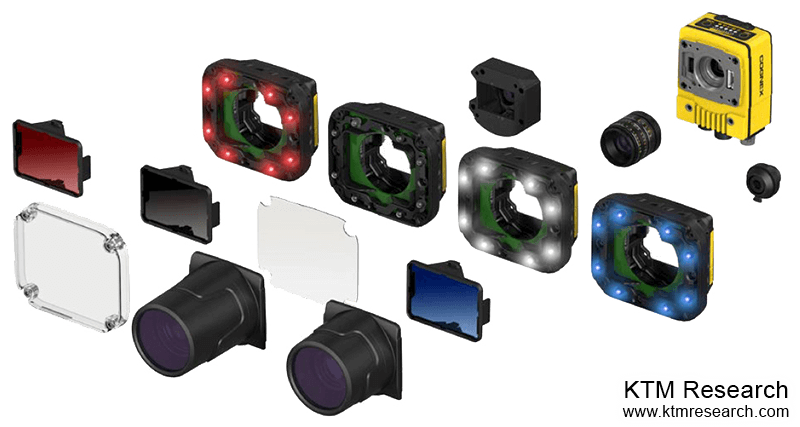 In our tests, we have found SurfaceFX capable of minimizing glare from shiny parts and picking out fiducial marks on plates without the need for any off-camera lighting. Another useful application of SurfaceFX is finding raised or sunken marks that are covered by printed text.

After processing with the Cognex 7802 camera and SurfaceFX, the letters and logo are now legible.

For more information on SurfaceFX, check out our more in depth look here, or click the image below.

We have been running long-term target acquisition repeatability studies the last few weeks on the Cognex 7802 and are impressed with the results. Using a 16mm lens, a blue filter, and a blue four quadrant ring light, we have taken about 40,000 images. With the camera riding on the end of a Denso robot, we found 4 pixels of range in X,Y coordinates and 2 degrees of rotation range in finding the intersection of two fiducial lines. This result was repeated with both fiducial marks (using SurfaceFX) and vision targets (using “all banks on imaging” four quadrant lighting image acquisition) through a variety of warehouse lighting conditions. With the camera held still and under fixed lighting conditions, the camera is capable of 0.5 pixel range in X,Y coordinates and 0.2 degree rotation range.

Even under aggressive “torture test” lighting conditions, the stationary camera only has 1.5 pixel range when stationary. The take-away is that the Cognex 7802 camera paired with the quadrant ring light and using the new software tools released in InSight 5.4 has impressive accuracy and repeatability. The Cognex 7802 does better than a Denso robot’s positioning accuracy. 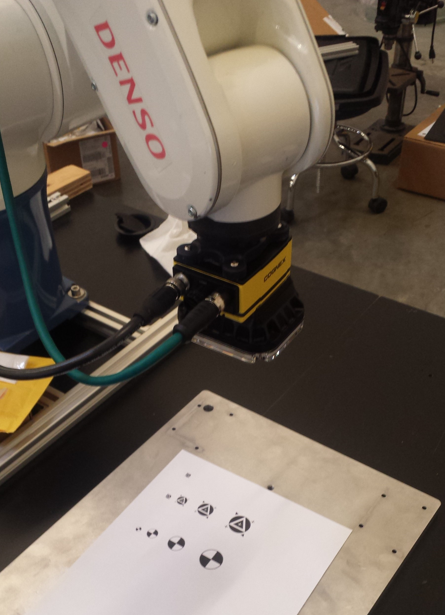 Cognex 7802 riding on the end of a Denso robot for long-term testing.

KTM Research is an engineering firm that specializes in industrial machine vision systems for quality control and vision-guided robotics.  Formed in 2009, we are located in Tualatin, Oregon.  We serve industries in the fields of advanced manufacturing, consumer electronics, bio-tech, food and beverage, research, and logistics.  Our systems have been successfully used by customers across North America and Asia.

Our goal at KTM Research is to be the first call you make when faced with a vision challenge.  Our team of engineers view themselves as an extension of your organization and strive to be your trusted vision partner.  Our success is our clients’ success.  Our collaborative approach to projects with our conservative and robust design process allows KTM Research to successfully complete projects that many others cannot.

Contact KTM Research at info@ktmresearch.com for more information on our vision solutions.